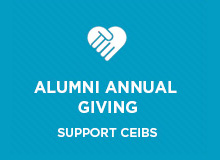 The CEIBS Italy Chapter was inaugurated on Friday, April 30, 2021 during a virtual ceremony. CEIBS Professor of Management and MBA Director Shameen Prashantham was on hand to declare the chapter official.

The Italy Chapter began as a community of alumni in a WhatsApp group created my Margherita Nostro (MBA 2021). The community rapidly grew and eventually became large enough to be considered as Europe’s sixth alumni chapter.

The chapter accounts for 49 members mainly located in Italy and China.

The Italy Chapter’s mission is to build a solid and interactive network of CEIBS alumni from Italy, based in Italy and/or with interests in Italy. Their goal is to become a point of reference in Italy for the whole CEIBS community, while fostering communication, promoting cross-chapter events and creating synergies with the local businesses and organizations.