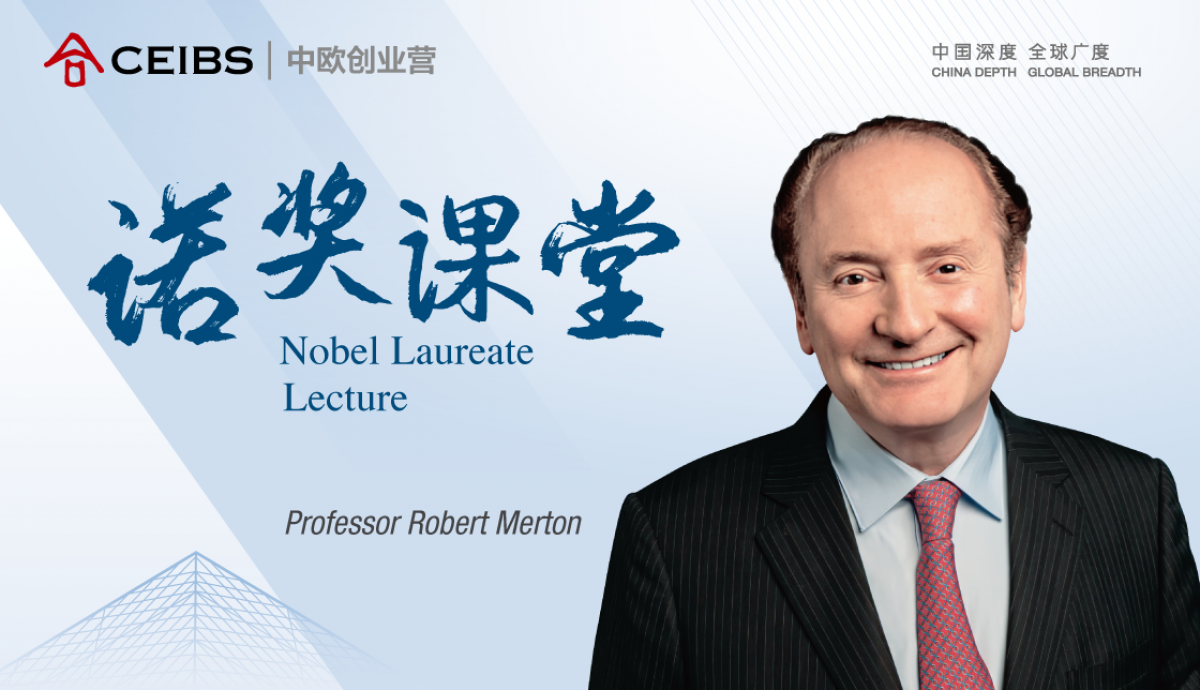 December 4, 2020. Shanghai – The past and future impact of finance on society and the economy was the subject of a captivating CEIBS Entrepreneurial Leadership Camp lecture from Professor Robert Merton recently.

The winner of the 1997 Nobel Memorial Prize in Economic Sciences delivered a wide-ranging speech to an audience at CEIBS Shanghai campus in which he spoke of the fundamental role diversification and risk management play in finance and how such concepts have shaped the world we live in today.

Prof. Merton also examined the future role of finance and explained that innovation in the sector will be driven by three factors; namely, understanding the application of finance, technology, and economic needs.

The jumping off point of Prof. Merton’s talk was rooted in the handling of risk. He gave an example from the 1970s in the US which spread to much of the rest of the world – the fall of Bretton Woods which undermined the currency system that had been in place for nearly a generation.

“Suddenly, in the early 1970s that whole system was dissolved and currencies started veering everywhere,” Prof. Merton said, adding, “To do trade, to do any sort of thing, suddenly you had to deal with the risks and the uncertainty of currencies, something that had not been looked at for a generation.”

Other crises in the 1970s, such as the crash in oil prices, double-digit inflation in the US and high unemployment led to the concept of stagflation, which standard economic policies at that time were ineffective towards.

The response of the industry to these issues was to innovate, Prof. Merton explained. Options exchanges, financial futures markets for currencies, interest rates and stocks, and the first electronic stock market were some of the solutions which arose during this period.

“These innovations, from between 40 and 50 years ago, have been paying social dividends ever since,” said Prof. Merton, adding that their wide global uptake shows countries broadly agreed they were beneficial to society.

Prof. Merton moved on to the 1980s to explain how intangible contracts promoted growth stability. He gave the example of Leipzig, in the early 1990s, in newly reunified Germany. The city was faced with building a gas pipeline to the North Sea to buy oil at a fluctuating price, or building pipeline to Russia which offered a fixed price for 30 years, but at considerable risk because it passed through a country which Germany did not have a history of stable relations with.

An innovative financial solution based on mitigating future market fluctuations saw Germany pay for gas from the North Sea from western producers, but banks would pay the difference if the cost was higher than Russian gas. The end result saw the city of Leipzig save $125 million (USD).

The world is currently going through another wave of financial innovation, with new payment systems and cryptocurrencies being prominent examples, said Prof. Merton, but he emphasized that innovation requires careful planning because rebuilding economic infrastructure such as retirement systems takes a long time.

He said when doing such restructuring, best practice is a good general guideline for incorporating ideas proven to work, but cautioned against sticking to it too closely.

“The world is changing in front of you and you just look at best practice, your system you’re going to build will be obsolete before it starts.”

Prof. Merton went on to give an example of how intangibles such as contractual agreements could be useful tools for governments faced with conflicting choices, and he extolled the benefits of global diversification, which he described as one of the principles of modern finance.

Prof. Merton also covered the usefulness of swap contracts as a means of dealing with controls or limitations on capital flows across international borders, and said that the future of finance lays in taking contractual agreements which work within limited jurisdictions such as within nations or particular markets, and scaling them up to work on a global basis.

The key, he said, is to find new ways to allow countries to make the best of their comparative advantages, whilst minimising risk and maintaining the benefits of diversification.

He also went on to say this method was the key to diversifying risk.

“All three can be done very efficiently using derivatives,” he said, adding, “And, as I’ve demonstrated to you, derivatives allow us to pick and choose what risks we want, get rid of ones we don’t want, implement policies that we want.”